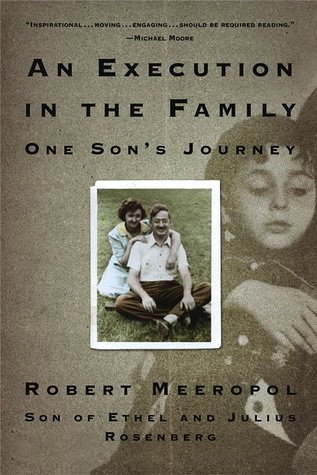 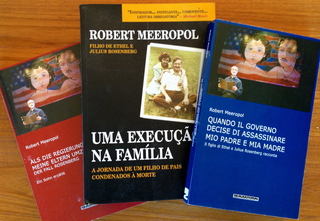 An Execution in the Family: One Son’s Journey

From Publisher’s Weekly:
"His story, which is a story of postwar America, is compelling. He chronicles with vision and clarity his personal and political journeys and the lengthy battle to uncover the truth about his parents' case. "For as long as I could remember we'd suffered whatever was said about our parents in silence. We had never had the opportunity or the emotional freedom to give voice to our opinions about our parents' trial and execution." When Meeropol and his brother did, in the 1970s, the floodgates opened-and over the years, the case's full horror was exposed. The Rosenbergs were charged with "conspiracy to commit espionage," not with selling atomic secrets. According to Meeropol, the person who confessed to that crime, Ethel's brother, David Greenglass, was pressured to reveal co-conspirators in exchange for his wife's freedom. And he succumbed-mouthing the words an FBI agent later testified he supplied. New documents reveal the Rosenbergs were executed for a crime the government knew they did not commit. Their sons have battled valiantly to clear their names and to lead productive lives, and Meeropol's captivating memoir deserves a spot on American history bookshelves."

An Execution in the Family has been published in Brazil, Italy, and Germany.